Some thoughts on how to Take ComicCon as me, after no longer feeling so overwhelmed or clueless as I did the first couple of times going to the Con. Taking the time to go over the listing for all the panels and screenings and planning the days in advance definitely reduces the stress.  And attending one event every 2 or 3 hours is more realistic than back-to-back, especially when the events are super popular and there is just not a chance to get in to see the panel.  I “lost” my chance to see Felicia Day and Agents of S.H.I.E.L.D. because I didn’t leave enough lead time (about 1 hour at the minimum) to wait in line for each. At this point, I do not seek out panels that are too closely related to print materials or how to promote Graphic Novels in Libraries/Schools — I got a lot of that in the past couple of years.  This year, I was really looking to broaden my knowledge base — so I went to a presentation on a new online multi player game that has some new elements that really excite me: more chances to meet up with friends or compatible strangers on the same world (since the players do not choose the mini-worlds but being grouped organically); more opportunities to customize one’s virtual surroundings and items; NPCs that interact wie players more intelligently — and quests that utilize various abilities and virtues.  I’m really rooting for this game!  Shroud of the Avatar (a new incarnation of Ultima games.)  The game creator also crowd sourced everything: from funding (almost 2 million dollars in 30 days on Kickstarter) to artwork, music composition, and even codes (such as a code to make the cloaks float artistically in the wind…) 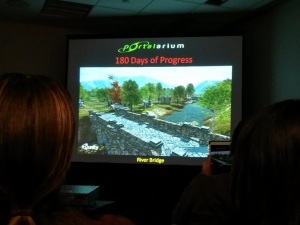 The Designer Toys panelists, the NY Indie Game Designers, and the Voice Actors shared so much of their expertise with the audience that I felt enlightened in their respective areas and wanted to find out more about those crafts.

My favorite event has to be the talented writer/illustrator duo John Layman and Rob Guillory, talking about Chew, the crazy, sick, hilarious, dark, and always surprising graphic novel series that has been gaining fan base and is going strong still!  They have published 37 of the planned 60 issues and we simply can’t wait for the plot to get wackier and more twisted!  This was what made me most excited in the line-up and they totally delivered — with a highly competent and effective moderator from Images Comics.  The hour went by too fast and we really could have stayed and listened and laughed more.  You could tell how genuinely these two collaborators admire and enjoy each other, and how important that relationship shaped the tone of the story.  Here are some things I learned:

It was refreshing to hear the writers and artists for Dark Horse comics stress the value of “text” novels and how much they respect the power of words that can create mental images within the readers’ minds.  They shared some of their personal “must reads”: Philip K Dick shorts, Snow Crash by Stephenson, A Wrinkle in Time, the Foundation Series, and books by Robert E. Howard (Conan the Barbarian and others.)  Glad to see quite a bit of overlapping of my own “must reads.” And it was entertaining to learn about the TV show King of the Nerds and the preparation of the second season.  Also gald to find out some upcoming projects from Image, Dark Horse, Marvel, DC, and Funimation. Today was the last day of the 2013 NYCC — Sunday, October 12th.

The two panels: one about Adventure Time and the other about a few new YA sci-fi books were both mediocre.  The lack of excitement or insights for the first event was largely the moderator’s responsibility and the second, the lack of depth of thought by the panelists. I thought about what made some of the events work better than others and came up with a few ideas about moderators and panelists: To be a good moderator, these are some Do’s

And here are a few Don’ts

As for panelists: do not sign up to be a presenter if you can only talk narrowly about your product and have nothing else to offer: it makes you look and sound shallow and it does not instill confidence in your potential customers to try out your products: be they books, toys, movies, games, art, or other merchandize.

Oh, I also visited publishers’ booths to read 2013 graphic novels nominated for the long list of the CYBILS G/N categories.  So far, I enjoyed everyone of them and will write something up for each soon!

A long summary but since I attended the Con for four days, it seems appropriate.