This post, meant to be published on May 16th, never got posted on the 16th Day of APA Heritage Month.  I have since read (listened to) the book and edited slightly my responses to Shliesman’s review.  Since this is a book eligible for Odyssey Award and I am currently serving on the committee, I am not going to discuss the quality of the writing, nor the technical merits/flaws, etc. of the recording.

This post is about a bigger issue, with the review as a springboard. 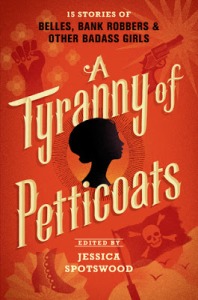 Megan Schliesman, in her Reviewing While White: A Tyranny of Petticoats, points out that there are fifteen stories in this short story collection and eight of the stories feature characters of color and one of them is about a Chinese American.

The more than a dozen contributors include four women of color: three of them are of Asian Pacific heritage. Marie Lu wrote a story about an Inuit girl in Alaska. Caroline Tung Richmond and Y.S. Lee both wrote stories about white protagonists and the one story about a Chinese American girl is written by a white author.

This is not surprising since Asian American children’s and YA authors have not been known to write only about Asian American experiences. Marie Lu’s Legend and the Young Elites trilogies all feature predominantly non-Asian characters. And both Y.S. Lee and Caroline Tung Richmond write about European girls.

Schliesman also pointed out that the one story featuring a Chinese American character portrays a girl who can see ghosts and commune with spirits.  (And several other stories featuring POC characters also include ghosts or spirits.)  She wrote,

Surely there are plenty of “badass girls” who can be imagined throughout and across U.S. history and authentically grounded in a variety of cultures without resorting to the fantastic. What am I to make of these stories? Are they grounded in any authentic cultural beliefs, or simply spun from their authors’ imaginations?

I’d like to think that this is a true question and that perhaps either the authors or cultural experts might be able to offer a satisfactory answer.  However, this could also be an accusation: perhaps Schliesman already decided that the authors have not grounded their stories in authentic cultural beliefs and by “resorting to the fantastic,” they have either exoticized the cultures or rendered them “backwards.”

The only thing I can offer here is based on my own singular experience as a Chinese girl growing up in Taiwan.  And from there, perhaps readers of A Tyranny of Petticoats can make up their own minds about whether this Chinese American story’s allusion to ghosts/spirits seems authentic.

Re-reading part of Maxine Hong Kingston’s wonderful memoir The Woman Warrior: Memoirs of a Girlhood Among Ghosts, I was reminded how my own girlhood in Taiwan was tightly woven with the beliefs in the spiritual world: my mother had lucid dreams and could tell us about immediate future events with quite a bit of accuracy; my father’s soul was raised to Heaven by 49 days of continuous Buddhist monks’ chanting in our house; fortune-tellers are consulted by most people to find the best day to open a business, to have a wedding, and the best match for one’s daughter or son; the many offerings at various temples from parents to secure their children’s high marks on the college entrance exam… these are things we routinely did (and most likely still do.)  As recently as just a couple of years ago, after a really frightening nightmare when we stayed in a hotel in central Taiwan, I asked my older sister, who sometimes serves as an exorcist to “clean houses (eject ghosts)” for her friends and clients, to perform a ritual involving clean water and a bowl of beans.  I slept soundly after that ritual. I definitely have a strong sense of pre-destined fate and still clench my fists in a particular pattern to ward off evil elements when passing a cemetery or encountering a funeral procession.  (Actually, an upcoming book written by a debut Taiwanese American author will explore Taiwan “ghost culture” deeply, and authentically.)

Will I take offense if someone out of my culture takes these elements and insert them clumsily and stridently into a tale without truly understanding where all these beliefs and sensibilities came from? Probably.  I imagine that it is not easy for an “outsider” to grasp or present accurately my strong fear of ghosts or my sense of comfort when smelling incense – both have roots in my own self and also my connection to the tradition passed down through many thousands of years.  This probably explains my inability to finish a well received book such as The Walled City by Ryan Graudin — I simply couldn’t get past her descriptions of the Chinese Constellations and how they are used in her tale and found her supposedly in-depth research, from afar without actually living through or experiencing the culture, lacking. This is also perhaps why I have yet to be able to read past the first segment of The Nameless City by Faith Erin Hicks — when the location in this Graphic Novel is so glaringly a superficial copy of a Chinese traditional city.

That said, is including ghosts/spirits in a story about a Chinese American girl automatically the mark of “exoticism” or “keeping the culture in the backwater days”?  I’d say no — not automatically at all.  It all depends on how the tale is told and the world is built and whether there is a true understanding of from where such elements came.  Just because I, a 50 something Chinese/Taiwanese woman feels a certain way about a text featuring “my culture” does not mean that mine is THE way or THE ONLY way that such text would be or should be viewed by other Chinese/Taiwanese or Chinese/Taiwanese American readers.

I hope that we can all accept that, since People are complex and Cultures and Histories are complex, Books about People and Cultures the Discussions about such Books are also unavoidably complex. We do have to keep digging and thinking and sometimes even changing our minds.